COVID-19 RESPONSE We are now offering in-office meetings on a first-come, first-served basis, as well as virtual appointments. Visit our COVID-19 page to learn more. 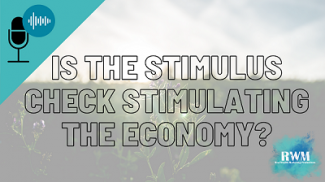 [Podcast] Are the Stimulus Checks Stimulating the Economy?

We're probably all sick of hearing the phrase "We're living in unprecedented times"... But the truth is the past year has been uncharted territory for America - at least for most of those living today. Previous pandemics in this country occurred before the population and economic growth of the past century, and of course before modern technology turned us into a global economy and made the spread of a contagious virus so easy and far-reaching.

Another way in which the past 12 months have been unprecedented is the scale of the government stimulus that has been provided to American citizens. Sure, there have been previous government "bailouts," but typically these were for large corporations and institutions. This is the first time so much direct financial assistance has been provided to the population at large.

While these stimulus checks have been extremely helpful for many Americans, what impact will they have on the general economy?

The true long-term effect has yet to be seen, but in this podcast, Former Comptroller General of the United States, David Walker, discusses the current overall state of the economy, how it has changed over the past twenty years, and where we may be heading in light of the recent government stimulus payments.

Tune in to learn:

Have you experienced financial or job changes due to the pandemic? Want to discuss your own financial plan and make sure you're on track? Contact our office to schedule a time to speak with one of our financial professionals.